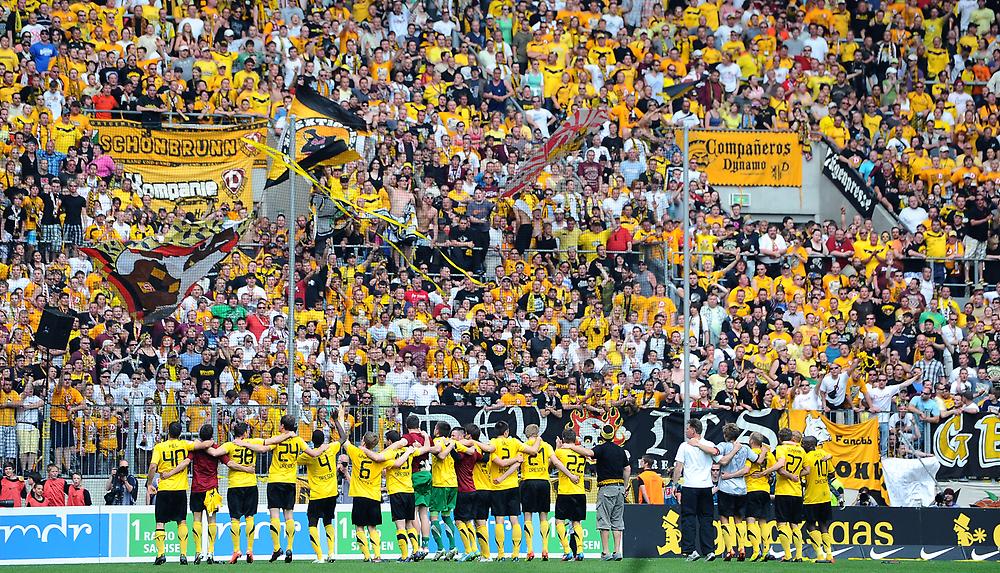 [accordion][acc title=”To read the article in english, press this button”]

Very few clubs in Europe can be proud of having, week after week, about 25000 supporters in their own stadium, enthusiastically supporting their team, as Dynamo Dresden has. The historical GDR team, currently in the third tier of German football, is certainly one of the very few teams of the Old Continent outside the top European leagues that manages to attract so many supporters to their home matches at Glücksgas Stadion.

Dynamo Dresden’s history walks hand in hand with the history of football at German Democratic Republic. Established in April 1953, Dynamo achieved almost immediate success and, a few months later, grabbed its first Championship of GDR. The success of the team, umbilically linked to SV Dynamo (Sportvereinigung Dynamo), a sports association of sorts, linked to the the country’s political forces (something quite common in the countries of the former Eastern Bloc), was not, however, taken lightly by some elements of the Politburo and the Stasi (GDR’s political police).

Erich Mielke, the head of Stasi, frowned upon the fact that a team from the outside of the capital could arouse so much interest and attention and he soon undertook to dismantle Dynamo, transferring their best players to a new Dynamo, this time in the city of Berlin (SC Dynamo Berlin). Lethally injured, Dynamo Dresden slowly descended to the fourth tier of GDR football. Powered, however, with a strong-willed determination, Dynamo pulled rank and in a short period of time (almost a decade after) regained its status at DDR-Oberliga. In 1969, after rising and falling several times, Dynamo definitely cemented their place at DDR-Oberliga and never left again until this competition disappeared in 1991.

This sporting stability then initiated the golden years of Dynamo, during which, by the hand of the football master Walter Fritzsch, they won the Oberliga five times (1971, 1973, 1976, 1977, 1978), two GDR Cups (FDGB Pokal) and took part in nearly fifty matches of the now extinct European Cup (currently know as UEFA Champions League). Known as “Small General”, Walter Fritzsch was a man ahead of his time, particularly regarding his knowledge of the game. With a steady hand together with plenty of sensibility, Fritzsch forever changed the course of Dynamo’s history and his craftsmanship brought some talented players to the game, albeit barely known outside the Iron Curtain, as for instance iegmar Wätzlich, Hans-Jürgen Kreische and Hans-Jürgen “Dixie” Dörner, a centre back with extraordinary class, who today still works for Dynamo Dresden’s scouting team.

During the 1975-76 season, Walter Fritzsch’s Dynamo reached, for the first time in their history, the quarter-finals of an European tournament (UEFA Cup), but was unable to overcome the mighty Liverpool, even if for the narrow one-goal margin on aggregate. Next season, probably the peak of the generation orchestrated by Fritzsch, Dynamo once again reached the quarter-finals of an European competition, this time the European Cup, leaving SL Benfica behind in the first round. Moving from one achievement to another, the “modest” Dynamo (modest when compared to the European football powerhouses of that time) managed to once again reach the quarter-finals of the European Cup, in 1978-79, being eliminated by FK Austria Wien this time around.

Dynamo’s success again reignited old feuds and Eric Mielke used his power once more to turn the tables on the team, favouring his beloved Dynamo Berlin, who was still title-deprived at the time. Contrary to what had happened in the 1950s, Mielke didn’t have enough power to transfer the players from Dresden to Berlin and so opted for the easy way out: coercing and threatening referees and several other elements of the country’s football hierarchy, granting no more no less than ten consecutive Championship titles in DDR-Oberliga (from 1979 to 1988) to his Dynamo Berlin.

Dynamo Dresden indeed suffered with this political/police intromission in the football of GDR, but the team didn’t lower their arms and, amidst all the turbulence, during which Stasi agents went as far as filming matches, looking for the next scapegoat to blame over their own mess, still manage to win the FDGB-Pokal on three different occasions and it wasn’t long before they conquered the DDR-Oberliga, after the Stasi’s influence (already in their downwards stage) began to wither, in 1989 and 1900. Already Walter Fritzsch, who had left the team in 1978, Dynamo followed his philosophy and his successors, Gerhard Prautzsch, Klaus Sammer, Eduard Geyer and Reinhard Häfner, led Dynamo towards several unforgettable moments, such as the quarter-finals of the Cup Winners’ Cup (1984-85 and 1985-86) and, in 1988-89, the memorable UEFA CUP semi-finals, where they succumbed to VfB Stuttgart. The team that, among others, left behind the powerful AS Roma and Aberdeen, was composed of internationally acclaimed footballers, such as Matthias Sammer, Ulf Kirsten, Ralf Minge and Andreas Trautmann, who amply contributed towards the success of this team.

The political and social alterations that stemmed from the fall of the Berlin Wall, on 9th November, 1989, and the subsequent extinction of the GDR (1990) inflicted deep wounds in that country’s football. Dynamo Dresden was no exception and the historical GDR club was unable to withstand the hardships of Bundesliga, where it only remained for four consecutive seasons. An inevitable financial smothered the club, greatly aided by the scams perpetrated by one of their former Presidents, Rolf-Jürgen Otto, who illicitly embezzled funds belonging to the club. Future didn’t look bright for Dynamo and the constant relegations and promotions, always in the lower tiers of German football, lasted until 2006, when the club finally found some financial and structural stability. Currently at the 3. Liga (the third tier of German football), Dynamo continue their quest for the much-needed stability to firstly return to Bundesliga 2 and then back to rolling with the big dogs in one of the best leagues of the Old Continent, the Bundesliga. Last season, by the hand of Stefan Böger, a manager with an interesting career on the German football youth system, Dynamo caused a stir by eliminating the all-powerful FC Schalke 04 from the DFB Pokal, when they overcame the Miners 2-1 in a tightly packed Glücksgas Stadion.

Apart from their good campaign at the Cup, Dynamo had a fairly impressive season start; without any explanation, however, the team started to lose stamina as the matches went by, having finished in the sixth place. Böger succumbed to the absence of positive results and left mid-season and Peter Németh, a former club’s footballer, took over the reins of the team until the end of the campaign. Dynamo’s enthusiastic supporters have once again high expectations for the upcoming season, despite the departure of two of their most important assets: the Spanish former captain Cristian Fiél, an extraordinarily talented midfielder, who, at the age of 35, decided to hang his boots, and their goalkeeper Benjamin Kirsten, the son of the legendary Ulf Kirsten, who had an extremely important role in the team.

In the dugout, commanding the team, will seat Uwe Neuhaus, a head coach with an enormous experience that definitely left his mark at 1. FC Union Berlin, where he was for seven years. Neuhaus knows the lower tiers of German football like no one else and his name seems to gather enough consensus as a person able to bring back Dynamo to higher grounds, with solid steps and coherent goals, as to prevent past mistakes from happening again. A wall and a castrating blindness (which can’t even be called “ideological”) have concealed Dynamo Dresden from Europe and from the rest of the World of football, but the team’s legacy is enormous and, year after year, it has been being fed by the passion of their supporters, so enthusiastic that not even the censorship of Stasi could keep them quiet. [/acc][/accordion] 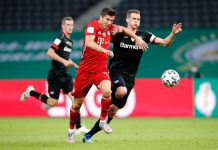 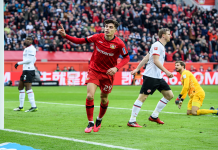 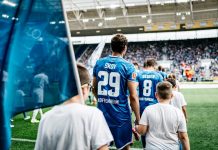